Skip to content
Beyond Botanicals > CBD Industry News > Go Beyond > CBG vs CBD: Is There a Difference?

When the 2018 Federal Farm Bill became law, hemp and all of its extracts were officially de-scheduled. This means that hemp is no longer a controlled substance and is federally legal to own. The way the law is written, that includes each of its individual extracts, too.

Back in 2018, that meant people were mostly talking about CBD – in fact, it’s probably all you heard about when hemp came up in a conversation. As this young industry continues to mature, there are frequent breakthroughs in the methods used to extract cannabinoids like CBD from the hemp – Cannabis sativa – plant. Other cannabinoids are becoming easier to obtain, and more popular as we learn about their great benefits.

It’s important to know a little bit about the hemp plant before exploring specific cannabinoids and their uses. With a good foundation, you will come to understand CBG and its close relatives. This knowledge is useful in selecting good, effective hemp extract products where you can be confident in getting exactly what you paid for.

The hemp plant is quite versatile, and it can develop differently based on environmental conditions like sunlight, water, soil and air quality, among others. Different cultivars,  sometimes called “strains”, will also develop varying cannabinoid ratios based on their genetics. Cultivar is a combination of the words cultivated variety, an indication of the plant’s history of breeding for a specific purpose.

You can think of the process of creating various cultivars in a way similar to breeding miniature ponies. First, a desirable trait like smallness in ponies or THC content in marijuana is identified. Next, only specimens that exhibit this trait are crossed with each other. Over time, the results tend to skew more and more toward that trait, strengthening its presence.

Whereas people historically grew cannabis with the intent of maximizing THC production, these modern cultivars can be bred to emphasize specific cannabinoids. For example, one variety of hemp may be strong in CBD with minimal THC, whereas a separate cultivar may have mostly CBG present, and yet a third separate variety emphasizes CBN. CBG flower is a newer development, with very few of these hemp strains available on the market.

The Farm Bill stipulates that a cannabis plant below 0.3% THC by weight is considered hemp, and a plant above 0.3% is considered marijuana. Therefore, THC dominant plants cannot exist under the hemp classification. These plants can still have high amounts of CBD as well, present in ratios like 20:1 or 10:1.

High CBD hemp plants can have trace amounts of THC in addition to other cannabinoids. This is favorable because it allows for the creation of Full Spectrum CBD Oils, the most effective variety.

The Secondary cannabinoid classification includes the rest of them beyond CBD and THC. The most well known of these include CBC, CBN, THCv, and CBG. We call these secondary cannabinoids because they are nearly never the dominant cannabinoid in a cannabis plant’s composition. More often than not, they are present in trace amounts – fractions of a percent compared to double digits percentages for THC and CBD.

Human intervention has allowed crossbreeding of different cannabis plants to favor secondary cannabinoids, but their dominance is more an exception to the rule than the rule itself.

Their historically low occurrence is the primary reason for so little being known about them. Fortunately, modern extraction techniques and talented scientists have opened many opportunities for promising research into potential medical benefits. Initial results have been promising enough that there are increasing calls for clinical trials.

What does CBG mean?

Most cannabinoids have three letter abbreviations, which are placeholders for a longer and more complicated name that describes their chemical structure. The minor cannabinoid CBG is an example of this. It stands for Cannabigerol, a popular secondary cannabinoid showing great promise with many potential benefits. CBG is a non intoxicating cannabinoid.

CBG strains of hemp are cultivated specifically to maximize the amounts of CBG that develop, even at the expense of CBD and THC. Maximum CBG is usually attained by harvesting hemp plants at a younger age than a CBD dominant plant would normally be harvested at.

Younger cannabis plants develop a precursor compound called cannabigerolic acid, CBGa for short. This is used initially to create CBG, and that CBG is eventually used to create all of the other cannabinoids present in a hemp plant. If the plant is harvested before that process can occur, you’re left with much more CBG than other cannabinoids. These challenges make CBG extraction more difficult than CBD extraction. 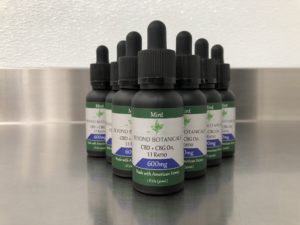 Sometimes it feels like it would be a lot simpler if we just had hemp extract oils. No billions of different choices, just one easy answer. That would make life less complicated, but it wouldn’t do justice to the true content of the oils you incorporate into your daily wellness routine.

Instead of hemp extract oils, they are named by the cannabinoid they contain the most of. This gives you a good way to know what you’re buying before you even look at lab results for a hemp extract product. Naming something CBG vs CBD oil thus becomes a simple matter of telling you what you’re getting the most of.

What is CBD Oil?

CBD oil is a base oil like hemp seed or coconut that contains dissolved cannabinoids. These oils are separated into two major categories.

High quality cannabidiol (CBD) oils made from Full Spectrum hemp extracts frequently contain strong amounts of both CBD and THC, as well as a smattering of CBC, CBN, and CBG.

Alternatively, THC-Free CBD oils can be made from isolated cannabidiol. These would contain only CBD instead of all the cannabinoids. Broad spectrum CBD oils also use a THC-free extract with trace cannabinoids.

What is CBG Oil?

Cannabigerol (CBG) oils are made in much the same way that CBD oils are. Many of them contain CBD and other cannabinoids by virtue of being made from full spectrum extracts. The oils get their names from the dominant cannabinoid they contain. In this case, CBG oils are hemp extract oils that contain more CBG than any other cannabinoids.

How Does CBG Work?

No matter their origin, CBG and CBD interact with a pair of cannabinoid receptors that are spread throughout the body. These CB1 and CB2 receptors are where the cannabinoid magic happens! You can think of each receptor like the lock of a door, and the cannabinoids like a key that fits into that specific lock.

What is CBG Good For?

There are many potential benefits of CBG being explored in studies across the country. Since its popularity is somewhat newer than CBD, this research is in an earlier state of progression before human trials and it will take far more time and effort to truly understand how CBG works and what its true benefits are.

CBG is able to act on both the CB1 and CB2 receptors of the endocannabinoid system. Because of its strong effect on these receptors, studies are exploring its potential to help support a healthy immune system as well as support the nervous system in maintaining a healthy homeostasis.

Many of these studies have noted that CBG is a natural bacteriostatic, meaning that it prevents the growth of bacteria. This could be an explanation for why cannabis plants are so naturally hardy and resilient. It also contributes to the shelf stability of CBG extracts.

CBD vs CBG Effects: What Should I Use? 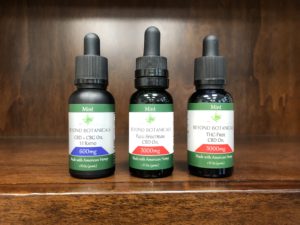 Cannabinoids deliver maximum benefits when they can work together as a group, instead of working on their own. This synergy is often called the Entourage Effect. As a general rule, it is best to use CBD products that take advantage of this by combining as many cannabinoids as possible to maximize their therapeutic benefits. This approach will save you the trouble of comparing CBG effects vs CBD effects.

Ideally, you should review the certificates of analysis for a particular CBD product to see what amounts of each cannabinoid it contains. Full Spectrum CBD oils are those that contain a whole family of cannabinoids.

As an example, let’s review this 1oz 1200mg Full Spectrum CBD Oil. Its certificate of analysis shows that each 1mL dropper contains: 43mg of CBD, 2.3mg of CBD, 2.0mg of Delta-9 THC, 1.86mg of CBG, and smaller amounts of CBDV, CBNa, and THCv. This is a strong profile that combines the effects of CBG with those of other major and minor cannabinoids for maximum impact.

The benefits of this synergy are obvious, but there is one significant downside. The amount of THC present in this Full Spectrum CBD oil is 2mg per dropper. It’s legal over the counter and compliant with the federal Farm Bill, but it’s still enough THC to make you fail a drug test.

Isolate products exist for this reason. By separating individual cannabinoids, it is possible to take advantage of their benefits without any of the potential downsides of THC exposure. CBG is non-intoxicating, meaning that it will not get you high, unlike THC. Even better, it will not make you fail a drug test.

Isolate products appeal to a wider range of people because of these benefits and their lesser downsides.

In reviewing our full spectrum oils previously, you saw that it is possible – and quite easy – to benefit from all of the common cannabinoids including CBG simply by using a full spectrum product. If your personal or professional needs make these full spectrum oils a bad fit, the next best thing is an isolate based product.

Why compare CBD vs CBG oil when you can have both at the same time? Our 1:1 CBG oil combines 600mg of isolated CBD with 600mg of CBG isolate to give you 20mg of each per dropper, without any THC. Now, you no longer need to compare CBG vs CBD effects, with better benefits than pure CBG oil. This oil uses only non intoxicating cannabinoids and is safe for use drug tests. It doesn’t compromise on any quality and still adheres to our tried and true extraction standards. It has the classic, refreshing mint flavor that’s become so popular with our CBD tincture line and is a great companion to start each day. By far, it’s the easiest way to take advantage of CBG benefits.

What is CBD?
CBD, or Cannabidiol, is a beneficial cannabinoid found in the hemp plant. It has a variety of helpful uses and has recently received approval from the FDA in its first prescription medication form – Epidiolex.

What is CBG?
CBG is often called the mother of all cannabinoids. This is because it develops early in the growth stages of hemp plants, and is used as a company to create the major cannabinoids, CBD and THC. Just like CBD, it can also be isolated and blended into helpful hemp extract products.

What is CBG good for?
Ongoing research is exploring any anti-inflammatory potential CBG could display, in addition to a host of other potential benefits. As with all cannabinoids, CBG tends to work best when combined with other cannabinoids. This synergy is a concept commonly referred to as the “Entourage Effect”.

How is CBG different from CBD?
While CBG and CBD are both cannabinoids, they are somewhat different in their structure and function. CBD is one of the major cannabinoids, named because they are a relative “end point” with active effects. CBG is considered a minor cannabinoid because it is a component in creating all the others.