Skip to content
Beyond Botanicals > CBD Industry News > Go Beyond > Helpful Cannabinoids: What is CBG?

In the last decade, familiarity with CBD has grown exponentially. It is now almost as recognized as THC – the most well known cannabinoid in history. THC, which is short for Tetrahydrocannabinol, is the compound in marijuana that gets you high.

THC and CBD aren’t the only cannabinoids however. In fact, researchers are currently aware of over 110 unique cannabinoids present in hemp and marijuana plants, as well as in the body’s endocannabinoid system. Studies continue to justify the need for more medical research as we learn about the potential benefits of each of these amazing compounds.

What Does CBG Mean?

CBG is shorthand for Cannabigerol. This cannabinoid is commonly known as the mother of all cannabinoids. This is because growing cannabis plants create a version of CBG first. This precursor is called CBGa, or Cannabigerolic Acid.

As cannabis plants mature, they use it to create all of the other active cannabinoids, including THC and CBD. CBG is mostly extracted from younger plants, where it exists in higher concentrations. The older a hemp plant gets, the more of its CBG becomes other cannabinoids. Thus, it is important to have harvests specifically for plants high in CBG if extracting it is your goal.

Is CBD an expensive cannabinoid?

Since the extraction process for this compound is less efficient and more difficult than it is for traditional CBD distillates or isolates, CBG products tend to be more expensive than what you may be accustomed to. As the hemp industry matures, there are noticeable trends solving this problem.

Hemp genetics experts are always testing out new varieties in hopes of establishing a cultivar that specifically grows one cannabinoid over the other. With every success, the “rare” cannabinoids become that much more common. This drives down their prices by easing extraction difficulties and making them that much simpler to obtain in bulk.

You should be excited to see trends like this, because it means wider access and lower prices for everyone looking to experience the benefits of hemp products.

What is CBG in Marijuana?

As more and more states legalize recreational dispensaries, we are witnessing the rise of boutique marijuana cultivars. Each of these strains, as they are commonly called, has a specific profile of tastes and effects. These effects are attributed to the specific ratios of cannabinoids present in the marijuana.

It’s important to know that CBG is CBG. Whether you find it in hemp or marijuana, it is functionally identical. CBG cannot get you high, which is something it has in common with CBD. Recall from our introduction earlier that THC, which is also present in marijuana, is the compound that will get you high.

What is Hemp CBG? 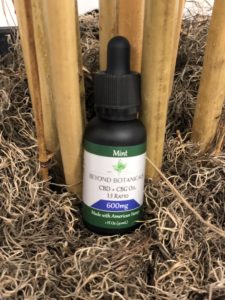 Cannabigerol also exists in hemp plants at the same very low concentrations, unless they are specifically bred for this purpose. There are a handful of strains now that develop CBG instead of Cannabidiol – CBD, and maintain less than 0.3% THC.

Any hemp product that contains more than 0.3% THC meets the legal definition of marijuana. Those products are restricted for sale through dispensaries only, and are still illegal in nearly half of US States as of 2022. Thus, Hemp CBG is more popular due to its wide acceptance across the country.

The 2018 Farm Bill descheduled hemp and finally opened the doors for more medical research into this and other cannabinoids. Many ongoing studies are investigating what effect, if any, they can have on cancer cells, inflammatory bowel disease, and chronic pain, among others. Since these studies can now be conducted legally, they will identify any potential health benefits for presentation to the FDA for approval in medication.

The Benefits of CBG (Cannabigerol)

Medical scientists have explored this compound since 1964, when Dr Raphael Mechoulam isolated various cannabinoids, including CBG, THC, and CBD in a laboratory for the first time. This was a major breakthrough that opened further study into the cannabinoid receptors in the human body, collectively known as the endocannabinoid system.

Known as CB1 and CB2 receptors, they react to CBD and CBG, as well as other cannabinoids like THC, in an effort to maintain homeostasis in the body. CBG works primarily on the CB1 receptors of the endocannabinoid system. This receptor is responsible for sending various signals to the nervous system, which control appetite stimulation, physical sensation, mental state, and more.

In contrast, the CB2 receptors are primarily responsible for tasks associated with communication between your organs and your immune system.

If you’d like to learn more about CB1 and CB2 receptors and how all of this is important to CBG products, review our primer on the Endocannabinoid System and Cannabis Chemistry.

What is CBG Oil?

Cannabigerol can be isolated from hemp plants in the same way that CBD can. It can be part of a thick, resiny distillate, or it can be a pure, powdered isolate. In both forms, it readily dissolves into carrier oils like coconut, olive, or hemp seed. This means it can be incorporated into many of the same products that CBD can, including capsules, topicals, and gummies in addition to oils.

When comparing different types of CBD oils like Full Spectrum, Broad Spectrum, or Isolate, we know that Full Spectrum is best due to the Entourage Effect – a synergy between multiple active cannabinoids.

Most Full Spectrum oils contain active amounts of CBG in addition to CBD, since they also come out in whole plant extractions. However, many people have good reasons for supplementing specifically with high amounts of CBG. For this reason, you will commonly see CBD-CBG blends to satisfy these needs without exposing customers to THC and the potential risks of drug test failures.

Earlier, we discussed the difficulty of CBG extraction leading to increased pricing when compared to more traditional CBD oil products.

How to use Cannabigerol Oil

Most commonly, you will see these oils available in a 1:1 ratio. Simply, this tells you that the oil has equal parts of each cannabinoid. For example, Beyond Botanicals’ 1:1 oil CBD-CBG oil contains 600mg of each cannabinoid for 1200mg total. In this blend, you’ll be getting 20mg of both per dropper you take.

The oil comes in our most popular mint flavor for a bright, refreshing taste sure to bring a burst of energy to your day. To honor our commitment to quality, we create this flavor using only USDA Organic Peppermint and Spearmint oils.

You can take a dropper full of CBG oil in the same way that you would use CBD-only products. They do not need to be taken with food, and can be added to food or drink if you prefer that to a dropperful of oil only.

What to look for in CBG Oil

When evaluating the oil you want to use, it is best practice to follow all the same principles you would when choosing a CBD oil. In the past, we’ve written on the importance of CBD certificates of analysis and how to interpret them. Everything you learned there will be helpful with each and every cannabinoid product you purchase.

Does CBG interact with medications? 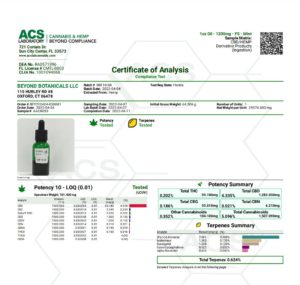 If you are going to incorporate any cannabinoids into your daily routine, it is important to consult with your primary care physician first. While CBD and CBG do appear to be relatively well tolerated, there are certain situations in which their use is contraindicated, and your doctor can help you use them safely.

If you take any medications that come with a warning not to eat grapefruit or grapefruit juice, you should avoid taking CBG supplements. It can act on your body the same way grapefruit does. They can cause other medications to filter out of your body more slowly, building up to dangerous levels.

CBG has also been shown in lab studies to change intraocular pressure. Glaucoma patients are particularly concerned with eye pressure, and any impact on this must be carefully considered by a physician to avoid any potential complications.

CBG is frequently called the mother of all cannabinoids, because its precursor compound is needed to create all of the other therapeutic cannabinoids we know of. Since its use as a supplement is relatively recent, research is ongoing. More is needed to determine the most effective way to take advantage of CBG’s benefits.

CBG can be present in trace amounts in Full Spectrum CBD oils. Alternatively, you can purchase CBG-specific oils that are made using an isolate. These isolates are commonly blended together with CBD in practiced ratios to maximize their benefits.

Like CBD, Cannabigerol was made legal by the passage of the 2018 Farm Bill. This bill legalized all hemp-derived extracts as long as they remain below 0.3% THC by weight.

Since CBG fits comfortably into this description, it is federally legal to own without fear of repercussions. The best way to avoid any questions about the provenance of your products is to check for third party labs before purchasing. These will confirm the THC concentration- and thus the legality – of your CBG oils.

Is CBG safe to use?

Like with all supplements, you should work together with your doctor to develop a plan that achieves your health and wellness goals safely. There are two specific concerns you need to review with your healthcare provider prior to using these supplements.

The first, and most important, is to avoid them if you are also taking medications that tell you to avoid grapefruit. The second, is to discuss CBG’s effect on eye pressure if you suffer from or are at risk for glaucoma.

Cannabigerol is non-intoxicating, meaning it will not get you high. Out of the commonly seen cannabinoids in hemp CBD products, THC and its variants (Delta 8, 9, and 10) are the only ones that will actually cause you to get high. It is important to review lab tests for the product you are purchasing to ensure that it aligns with your expectations for the presence or lack of THC.

What is CBG?
CBG, which is short for Cannabigerol, is another active cannabinoid found in the hemp plant. Traditionally it is referred to as the mother of all cannabinoids, because this one is used up by hemp plants to make each of the other cannabinoids, like CBD and THC.

What are the benefits of CBG?
Like CBD, CBG works on the body’s endocannabinoid system to maintain homeostasis. Combining it with CBD gives a potent one-two punch to help promote relaxation and improve general well-being.

How to use Cannabigerol Oil?
Cannabigerol, or CBG Oils, can be used exactly the same way CBD products can – whether it comes in edibles, oils, or topicals, CBG is a wonderful cannabinoid worth adding to your daily routine.

Is CBG legal?
The 2018 Federal Farm Bill legalized hemp and each of its constituent extracts, meaning that CBG is also legal and subject to the same rules and regulations that CBD is.